Genetics Testing Prior to Pregnancy

One of the main desires of a person is to give birth to a healthy child.

This is greatly influenced by the lifestyle of parents, nutrition, pregnancy and childbirth.

Sometimes even healthy people can face difficulties in conception, during pregnancy, and also pass on a hereditary disease to their child. Today we have the latest technology to know and avoid major hereditary diseases.

Regardless of the age of the future parents, it is advisable for a couple to undergo genetic screening in preparation for pregnancy. This analysis is carried out once, since it does not change throughout life.

Why carry out a genetic test at the planning stage of pregnancy?

Each person has an average of 1 to 10 mutations in genes associated with hereditary diseases. Carriage of mutations can be asymptomatic and can be passed from generation to generation and be unknown in the family until a partner with the same mutation meets.

Whether a person is a carrier of hidden mutations in some gene, whether a child in a couple can potentially be born with a genetic disease – that is why it is important to do a genetic test in preparation for pregnancy. 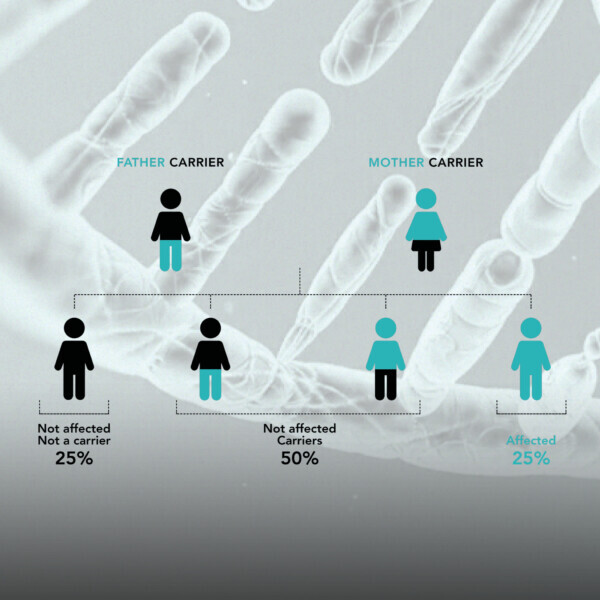 Genetic screening for the carriage of hidden mutations is shown:

If a couple in the next generations has a common relative, then the probability of carriage of mutations in the same gene significantly increases, which increases the risk of having a child with hereditary changes. If in a couple both parents are carriers of a mutation in the same gene, the risk of having a child with a hereditary disease increases to 25%. Genetic testing at the stage of pregnancy planning is recommended for everyone who takes a responsible approach to their health and the health of their future children.

What research should be done on the main hereditary diseases?

The most common of all hereditary diseases are cystic fibrosis and spinal muscular atrophy (SMA). It is known that the frequency of cystic fibrosis is 1: 2000, SMA – 1: 6000 cases of newborns (every 45th healthy person carries mutations in the genes of these diseases, but does not get sick himself, since he carries a mutation in only one gene). When two such carriers meet in a pair, the risk of having a sick child will be 25%. Therefore, the basic package for testing a couple when planning a pregnancy includes precisely examinations for cystic fibrosis, spinal muscular atrophy, phenylketonuria and fragile X chromosome (FMR1).

What is Expanded Hereditary Disease Screening?

Some diseases are less common than cystic fibrosis and spinal muscular atrophy, but screening for them is advisable. Such diseases include: hereditary non-syndromic hearing loss, diabetes, galactosemia, congenital dysfunction of the adrenal cortex, hemoglobinopathies (sickle cell anemia) and others. As a result of research in the field of genetics, we can now determine the carriage of genetic diseases (a panel of associated 420 genes) using the CarrierSeq method or exome sequencing, analyzing 5800 active genes.

This test, which is performed in pairs, is used to detect mutations in genes responsible for recessive diseases that are associated with the X chromosome. Based on this information, and in the event that both partners have a mutation in the same gene, all available means are used to ensure that the unborn child does not inherit the disease.

Why carry out genetic testing of donors?

At Reprolife Medical Center, we understand that this test is of great importance and we believe it is very important to be aware of any abnormalities that may affect the unborn child, therefore we conduct genetic testing as part of our standard protocol for all donors.
This is true for both egg donors and sperm donors and does not incur additional costs for parents who require this program.

Detailed genetic research – exome sequencing. This study provides us with a wealth of information about DNA mutations and the carrier status of many hereditary diseases. These studies are carried out in cases where there is no burdened family history. If the family has had cases of cancer at a young age (up to 60 years) or diseases that are associated with genetics, additional research or targeted bioinformatic analysis is needed. If the parents are carriers of mutations associated with the same hereditary disease, they will be offered preimplantation genetic testing (PGT-M) of embryos. This method makes it possible to select a healthy embryo before transferring it to the uterine cavity.